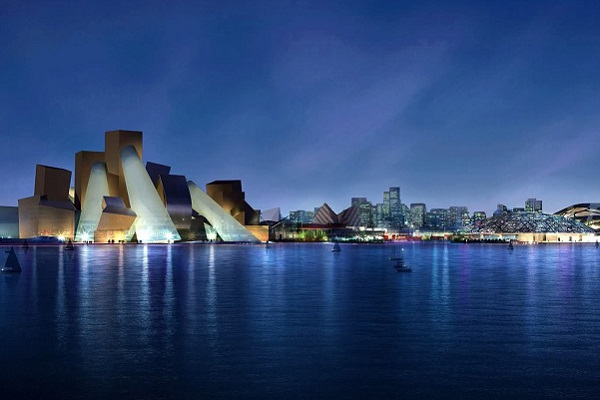 20 years after the project was first announced, it has been revealed that the Guggenheim Abu Dhabi will open in 2026.

First announced in 2026, the Frank Gehry-designed attraction has been subject to successive delays, most recently due to the Coronavirus pandemic.

Revealing the new opening date at a press briefing in Switzerland, Guggenheim Director Richard Armstrong told the Art Newspaper “we think it should be five years from next week.

“It looks like everything is coming together so we can say something definitive.

“It has been a relatively long gestation.”

The Guggenheim Abu Dhabi was originally set to launch in 2012 on Saadiyat Island, before being moved to 2017. Pre-COVID, Armstrong said the institution would debut in 2022 or 2023.

Set to be the New York-based Guggenheim Foundation’s largest location, covering 30,000 metre², the project is being overseen by Abu Dhabi’s Department of Culture and Tourism.

Commenting on the delays, Armstrong added “our building is challenging; it will be his big, late masterpiece.”

On the effects of COVID-19, he noted that the museum has “come out as a better institution that is looking more to the future”, adding “we’ve had a very active acquisitions program for about 12 years now in the region and globally; it’ll be a museum that looks at the whole world from 1965.”

Abu Dhabi’s investment in culture
In June, Abu Dhabi pledged to invest US$6 billion in cultural and creative industries as part of the UAE’s ongoing efforts to diversify its economy away from oil.

This has included the development of museums on Saadiyat Island, which is already home to the Louvre Abu Dhabi with plans for a Zayed National Museum.

By contrast to Saadiyat Island, Abu Dhabi’s Yas Island in Abu Dhabi is a primarily a leisure and destination, with offerings including Ferrari World, Yas Waterworld, and Warner Bros World.

The National Aquarium is also opening this year in Abu Dhabi.

18th May 2017 - Officials insist Guggenheim Abu Dhabi will be built

24th May 2016 - No start date for Guggenheim Abu Dhabi project