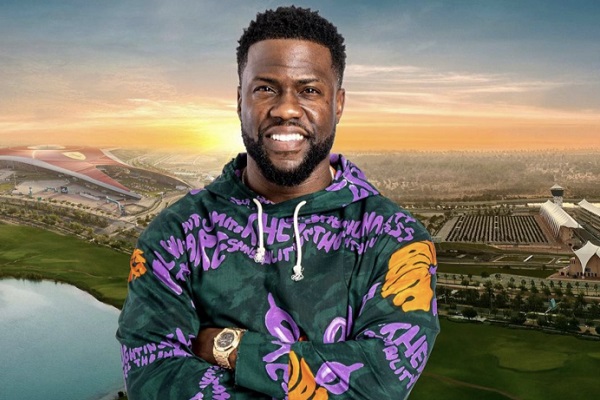 Abu Dhabi’s Yas Island has announced that US actor and comedian Kevin Hart as its Chief Island Officer - a role that will see him promote the “world’s most entertaining island”.

In a video released to coincide with the start of Arabian Travel Market 2022, the international travel trade show which is taking place in Dubai until Thursday, Hart can be seen enjoying the UAE destination's attractions.

Advising that “big things are coming” and that he has been hired to “Hartify” Yas Island, Hart’s video commentary sees him state “there goes Yas Island’s first Chief Island Officer in a white Ferrari thinking he’s a big deal,” as he drives along the streets of Yas in the supercar, adding “guess what, this is a big deal”.

Hart goes on to say “the world’s most entertaining island hired me, Kevin Hart, to Hart-ify everything out here. We are going big on K-everything, because going big, that’s my middle name. Actually, it’s Darnell, but whatever.”

Hart’s partnership with Yas Island was first announced last summer, when he shared a clip with his followers to reveal that it would be his next holiday destination.

Hart is not the first celebrity to work with the destination. Earlier this year, Ranveer Singh, one of India's top actors, starred in a promotional video for Yas Island, which showed him taking in the best of what it has to offer.