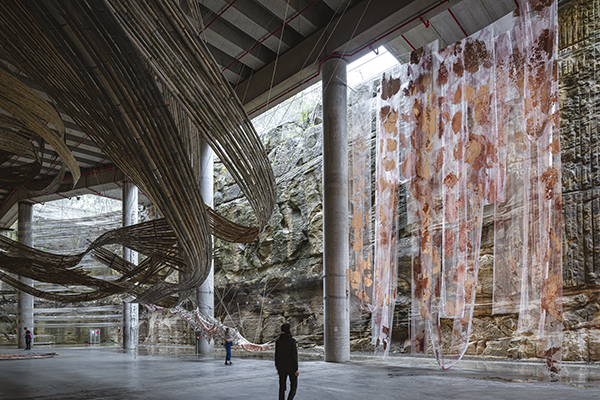 The 23rd Biennale of Sydney opens to the public this weekend offering over 330 artworks by over 80 participants and 400 events presented across the city from 12th March to 13th June 2022 at venues including Art Gallery of New South Wales, Barangaroo including The Cutaway, Circular Quay, Arts and Cultural Exchange, Museum of Contemporary Art Australia, National Art School in partnership with Artspace and Pier 2/3 at Walsh Bay Arts Precinct.

The 23rd Biennale of Sydney, titled rīvus, meaning ‘stream’ in Latin, features new work and commissions responding to water ecology and relationships with the natural world. Audiences will experience large-scale immersive installations, site specific projects and living works by international participants including Kiki Smith, Sheroanawe Hakihiiwe, John Gerrard, Jumana Emil Abboud and Ackroyd & Harvey alongside Australian participants such as Cave Urban, Badger Bates, Clare Milledge, Julie Gough and D Harding. The list of participants extends beyond the realm of the visual arts and includes bodies of water and their custodians around the world including Australia, Bangladesh and Ecuador.

The 2022 edition has been developed and realised by a Curatorium comprised of Artistic Director and Colombian curator José Roca and co-curators Paschal Daantos Berry, Anna Davis, Hannah Donnelly and Talia Linz.

The Curatorium note “rīvus is articulated around a series of conceptual wetlands situated along waterways of the Gadigal, Barramatagal and Cabrogal peoples. These imagined ecosystems are populated by artworks, experiments and research, responding to our connections, and disconnections, with water. Rivers have been the ways of communication and the givers of life for entire communities and a growing number of jurisdictions around the world are granting rivers legal personhood rights. As we see waterways having a voice in the courtroom, we wanted to extend this further into the public sphere with our exhibition. Many of the Biennale of Sydney participants have worked with waterways, local and international, to share their stories and raise these important conversations.

“Participants will investigate the ecologies sustained by waterways worldwide. This can be seen in works like Marjetica Potrč’s collaboration with Wiradjuri Elder Uncle Ray Woods which tells the story of two rivers: the Soča in Slovenia and the Galari (Lachlan River); these works will be shown alongside Brazilian artist Caio Reisewitz mural-sized collage, which references the aquifer under the Amazon jungle. D Harding’s exploration of ancestral waterways with the local community has inspired a new carving work. The Australian premiere of The Great Animal Orchestra, a major installation created by American soundscape ecologist Bernie Krause and United Visual Artists, will immerse audiences in the sounds of vulnerable habitats in Africa, North America, the Pacific Ocean and the Amazon River, whilst French artist Marguerite Humeau will present a new sculptural commission envisioning a world in which mass extinction has accelerated to a point of no return.”

Barbara Moore, Chief Executive, Biennale of Sydney adds “This year’s Biennale is going to feel great to experience. The city will be vibrant with artworks and events that invite everyone to come together and connect with each other, celebrating the participants and their stories and honouring the diversity of thoughts and ideas that empower us all. We are thrilled to unveil these incredible works and encourage visitors to flow between the venues, to see and feel different perspectives on our connections with waterways and each other.’ 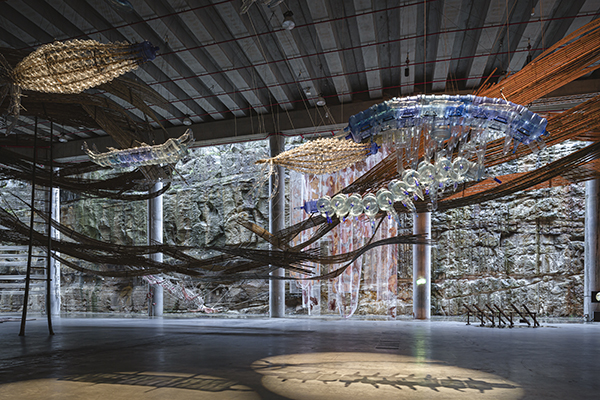 •Irish artist John Gerrard, best known for his sculptures and installations which typically take the form of digital simulations, presents Leaf Work (Derrigimlagh) (2020). Displayed on a monumental six metre x six metre LED wall set into a polished mirrored pavilion on Barangaroo headland, Gerrard has taken digital technology usually employed by the commercial gaming industry to create virtual worlds that simulate extremely detailed and authentic landscapes. Presenting a single female figure clad from head to toe in green Irish spring leaves who slowly walks in a circle upon an empty landscape, Leaf Work animates the stress felt by the environment in a response to the escalating climate crisis.

•Cave Urban, a Sydney-based multidisciplinary studio formed by artists, architects and designers, presents Flows, one of the largest bamboo structures ever produced in Australia. The site-specific, immersive installation is the largest project Cave Urban has ever undertaken and is inspired by the flow of a river. Spanning 600 square metres the work weaves throughout the expanse of The Cutaway moving between and around the architecture and hovering above the other artworks.

•The Australian premiere of The Great Animal Orchestra, a major immersive installation created by American soundscape ecologist Bernie Krause and London-based collective United Visual Artists. Presented in partnership with Fondation Cartier pour l’art contemporain, this powerful environmentally focused work draws from Bernie Krause’s archive of recordings with a soundscape of 15,000 animal species recorded over the last 50 years from both terrestrial and marine natural habitats. Krause’s unparalleled research is a rare insight into the unseen world of animals. It reveals the beauty and the intricacy of animal vocalisations, which are now in danger of being silenced by human activity. The immersive soundscape comes to life with visualisations, created by United Visual Artists, of each animal’s contributions to the ‘orchestra’ in vulnerable habitats in Africa, North America, the Pacific Ocean and the Amazonas (Amazon River).

•Mata Aho Collective, a collaboration between four Māori women, presents He Toka Tū Moana | She’s a Rock, a woven installation responding to the architecture of The Cutaway. The work references the meeting place of fresh and salt water and is inspired by traditional Māori strapping systems called Kawe.

•D Harding, a descendant of the Bidjara, Ghungalu and Garingbal peoples, has collaborated on a participatory project with their community and family in Woorabinda, exploring ancestral waterways. This project has culminated in a mapping carving by Harding presented at The Cutaway. 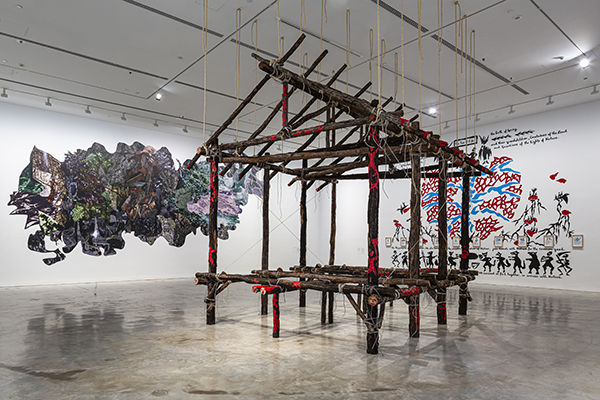 •French artist Tabita Rezaire based in French Guiana, presents Mamelles Ancestrales, drawing inspiration from the megalithic landscapes of Senegal and The Gambia, space debris, archaeology, astronomy, numerology, theology and African understandings of the cosmos. Displayed on a large floor-based screen surrounded by a circle of stones, the film is the result of the artist’s research and expeditions to ancestral sites.

•Venezuelan artist Milton Becerra presents an installation with three large stones held in space by a network of thread. These threads are the structural elements holding the stones, which appear to levitate as central points within the mass of energy. The lines that radiate from them simulate orbits that create vibrations and subtle sounds.

•Slovenian artist and architect Marjetica Potrč presents a new work, The House of Agreement Between Humans and the Earth, a structure that looks at the relationship between humans and the natural world. This is presented alongside her signature wall drawings telling the rights of two rivers: the River Soča in Slovenia and the Galari (Lachlan River) on Wiradjuri Country in Australia, facilitated by conversations with Wiradjuri Elder Uncle Ray Woods and academic and filmmaker, Bernard Sullivan.

•Alongside the artworks, a 365-million-year-old fish fossil from Canowindra NSW is displayed to the public for the first time. 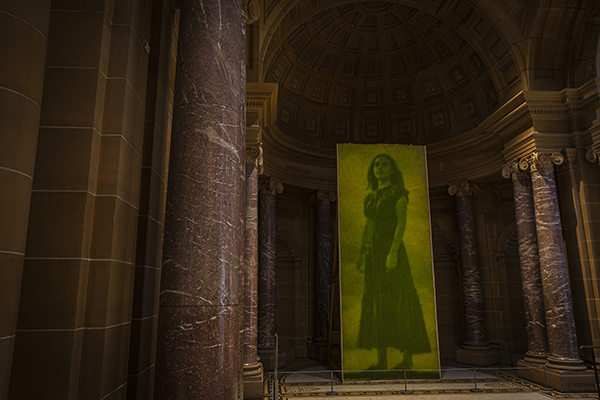 •Barkandji elder Badger Bates presents a monumental wallpaper work in the entrance of the Art Gallery based on one of his linocuts of Lake Menindee, depicting the fish kills of the drying lake, reminding us of a shared responsibility for Country.

•The 23rd Biennale of Sydney posthumously presents one of Naziha Mestaoui’s most recognised projects, One Beat, One Tree, which debuted during the United Nations Climate Conference in 2015. Using video-mapping techniques and movement tracking, audiences plant a virtual tree and encourage it to grow with their body movement. A real tree will be planted for each virtual one.

Pier 2/3
The Biennale returns to Pier 2/3 for the first time in 10 years, after its major redevelopment as part of Walsh Bay Arts Precinct. Many of the works respond to “briny” environments, where saltwater meets freshwater, with highlights including:

•Trawlwoolway artist Julie Gough has been working with the First Nations Collections and 3D Digitisation teams at the Australian Museum and has brought together one hundred 3D printed replicas of Tasmanian stone tools from the Australian Museum Collection that have been held off-Country in Sydney. The stone tools are connected to sites along rivers and tributaries that Gough has been exploring by kayak.

•Casino Wake Up Time, a collective of Indigenous women in Northern NSW working in traditional Bundjalung weaving, present a suspended installation that explores stories of removal.

•Torres Strait 8, a collective on the frontlines of advocacy for the climate crisis in Torres Strait, participate with a hybrid art-as-protest piece featuring campaign materials created as part of the Our Islands Our Home Campaign. The collective’s participation in the Biennale continues to magnify the campaign fighting for justice for the communities of Zenadh Kes in holding the Australian Government accountable on climate change policy.

•British-Finnish artist, composer and performer Hanna Tuulikki presents a new video work looking at the mythical beings known as selkies, singing a piece she has composed to explore multispecies communication.

At the National Art School, presented in partnership with Artspace, works explore ideas around still and stagnant waters, as well as submerged and re-emerging histories.

•Colombian artist Carolina Caycedo presents a large-scale mural of satellite photographs depicting the progressive devastation on the Magdalena River caused by the El Quimbo Dam, as well as sculptures, textiles and drawings that speak to the political agency of waterways.

•Filipino artist Cian Dayrit presents a new embroidered textile piece created in collaboration with local practitioners, speaking out against dam projects and the impacts of privatisation of common natural resources.

•The Myall Creek Gathering Cloak comes out of a contemporary revitalisation of traditional possum skin cloak making for healing, cultural renewal and reclamation. The Cloak shows the songlines of Gomeroi people from Boggabilla to Glen Innes and is a collaborative work made by local First Nations Community including Elders, descendants of survivors of the Myall Creek massacre, and members of the Friends of Myall Creek Memorial.

•English artist Joey Holder transforms the chapel space, taking audiences on an aquatic journey to an undiscovered deep sea brine lake and the strange, shapeshifting creatures that live there. 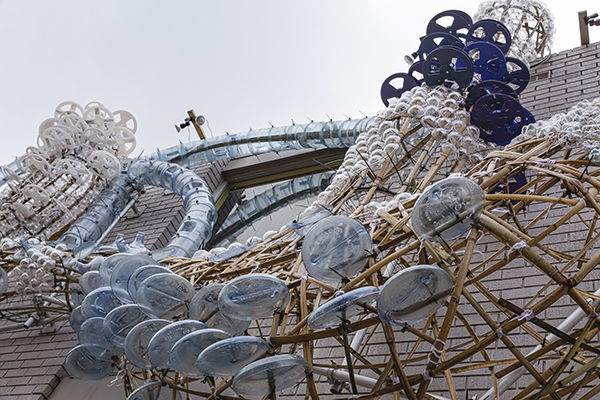 Arts and Cultural Exchange (pictured above)
At Arts and Cultural Exchange in Parramatta, Manila-based artist Leeroy New, famously known for creating Lady Gaga’s “muscle dress” presents a site-specific work, using recycled, organic and industrial materials wrapping around the façade of the building. The form is based on the organic root formations of the iconic Balete tree of Southeast Asia.

For all of the 94 days of the exhibition, the projects and ideas will be activated and explored through an expansive program of events and experiences, titled The Waterhouse, including the return of school programs. Anchored at The Cutaway at Barangaroo, the public program conceived by Lleah Smith, Curator of Programs and Learning, in conversation with the Curatorium, will activate the city through daily programming for all ages and abilities.

Exhibition entry is free. The 23rd Biennale of Sydney will be open to the public from Saturday 12th March to Monday 13th June 2022.

For further information on the Biennale of Sydney, please visit biennaleofsydney.art.

7th May 2015 - New Australian Pavilion opened at the Venice Biennale