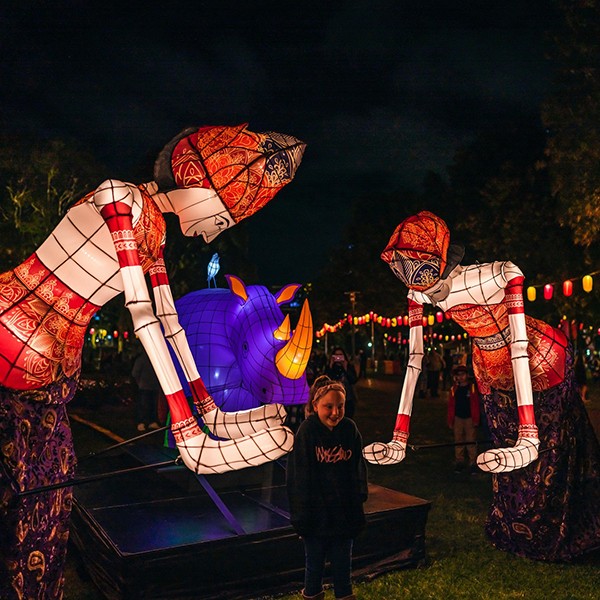 The trail began at Adelaide Festival Centre, with attendees walking past an impressive 40 metre Hong Kong dragon lantern along the Adelaide Oval footbridge before reaching the main attractions over at Pinky Flat in the riverbank precinct.

More than 20 giant lanterns from previous OzAsia Festivals were on display, along with two new additions – an Adelaide rosella lantern sponsored by Green Adelaide and a moon lantern floating on the River Torrens/Karrawirra Pari.

OzAsia Festival Artistic Director Annette Shun Wahadds “It was fantastic to see so many people out in support of our opening week. The whole riverbank precinct was absolutely glowing. Our Moon Lantern Trail gave an up-close experience with an exciting collection of giant lanterns, while in Adelaide Festival Centre venues our exceptional artists received well-deserved and rapturous applause from audiences.

“OzAsia Festival is all about the cultural engagement between Australia and Asia, and with the new direction in programming there’s a focus on the people who embody those connections – Asian Australians – and their brilliant works coming through of such a high calibre.”

Adelaide Festival Centre Chief Executive and Artistic Director Douglas Gautier notes “with another two weeks to go, we are thrilled with the support we’ve already received from audiences for OzAsia Festival 2021. After an online offering last year, it’s fantastic to come back to our biggest attendances of any OzAsia Festival opening in the 15 years since its inception.”

Foodies favourite Lucky Dumpling Market reported its busiest weekend in the event’s five-year history, with tens of thousands gathering at Elder Park to enjoy free live music and a diverse range of cuisines from more than 20 food vendors. Lucky Dumpling Market is open from Tuesday to Sunday and runs until Sunday, 7th November.

The world premiere of Perahu-Perahu will see the ancient Indonesian storytelling technique of shadow play turned on its head for an immersive show in the Space Theatre from 27th-30th October.

The freshest emcees, singers, musicians and DJs from Darwin and Adelaide will team up for Pinoy Street Party, a joyous celebration of Filipino culture and heritage at Nexus Arts on Friday, 29th October.

In the third and final week, dance theatre work TWO will explore the interdisciplinary relationship between contemporary dancer Raghav Handa and maestro tabla musician Maharshi Raval during performances in the Space Theatre on Friday, 5th November, and Saturday, 6th November.

The full OzAsia Festival program can be viewed online at www.ozasiafestival.com.au.