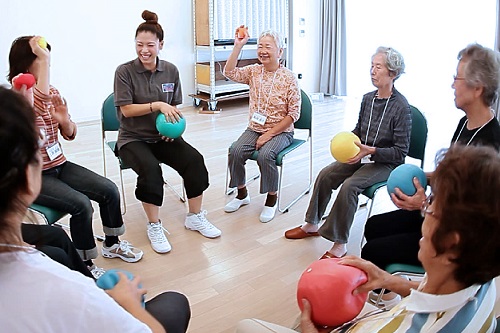 Expertise gained by Japanese fitness club operator Renaissance in dealing with the nation’s ageing population is be introduced in South Korea and then other Asian countries.

With the number of elderly people swelling across Asia, Renaissance signed an exclusive agency contract with Seoul-based travel company Channel Factory to introduce its Synapsology exercise program that aims to prevent dementia in April.

Since that time, the program has been marketed to aged care providers.

The Synapsology program, developed by Renaissance in 2011, is aimed at stimulating brain activity by having people do two things at once, tossing and catching a ball while doing simple math problems or moving the hands and feet in different ways simultaneously.

With inquiries about the program increasing in countries other than South Korea over the past few years, Renaissance is also looking to expand the program in China and Indonesia.

Synapsology exercises can be done anywhere and sessions lasting just 10 to 20 minutes are effective, according to Renaissance. Activities can also be adjusted according to the age, gender, and fitness level of the participants.

Research on the effectiveness of the Synapsology program on the cognitive function and physical and emotional health of elderly people conducted by Renaissance and Japan’s University of Tsukuba suggests the program improved the alertness and motor skills of those who took part.

At aged care facilities, many people who participate in the program say they feel they are using their brains more because of the unfamiliar movements they perform. Those who supervise the exercises say participants are more communicative with others and show more engagement in activities.

Synapsology is also used in a variety of settings outside nursing homes in Japan, with over 200 local government facilities and companies using the program.

By 2060, the share of people over 65 is forecast to rise by about 10% compared with 2015 in countries such as Japan, China and South Korea, according to a Japanese Cabinet Office white paper on aging societies.

Some estimates predict that by 2050, South Korea will have the world’s second-highest proportion of elderly, trailing only Japan.

According to data from the Cabinet Office, some 4.62 million Japanese aged 65 and older had dementia in 2012. By 2025, about 7 million people, or one in five Japanese aged over 65, are expected to have the condition.