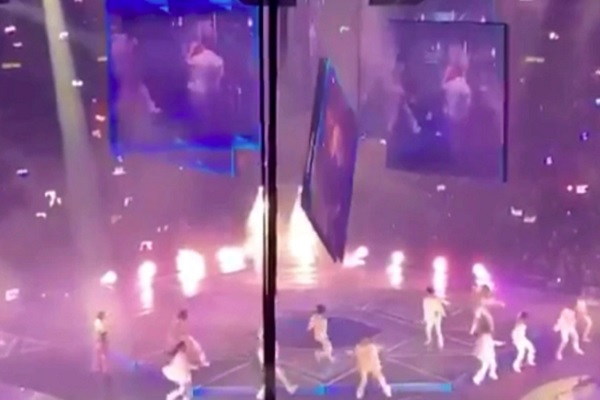 Hong Kong Police have made a series of arrests in connection with an incident in July where a large LED screen fell on to the stage at the Hong Kong Coliseum during a concert by local Canto-pop group Mirror.

The 28th July screen collapse, which occured in front of a crowd of 20,000 fans, saw backing dancers Mo Li Kai-yin and Chang Tsz-fung suffer injuries. While Chang was discharged the next day, Li suffered severe injuries and possibly lasting injuries.

He remains currently in hospital.

One revealed in preliminary findings in August that the weight of the screen had been incorrectly calculated. It also reported use of a substandard cable and an incorrectly installed rope guard.

As a result, four suspects from the concert’s principal contractor Engineering Impact Limited were apprehended last Friday, with the South China Morning Post reporting that a business director, two project managers and a technical coordinator from the contractor were arrested. The fifth suspect who was arrested was a senior technician from subcontractor Hip Hing Loong.

The South China Morning Post also reported that Kowloon West regional crime unit Superintendent Alan Chung had accused the contractors of purposefully underreporting the weight of the equipment in order to speed up the approval process, and had even encountered a technical issue several hours before the show itself went forward.

He declared “we cannot find any evidence that the company had arranged any authorised person or engineer to inspect or check the LED panel", adding that the investigation revealed that the contractors had not taken any measures to ensure the equipment met safety standards.

Hong Kong Police found that Engineering Impact Limited had underreported the total weight of the six LCD screens at the show by 63%, claiming that the 4,468.7kg worth of screens had only weighed 1,632.9kg. It was also revealed that the weight of the shows’ speaker sets had been severely underreported, with the contractor claiming that the 5,552kg worth of speaker sets had only weighed 725.7kg.

Superintendent Chung also disclosed that police have been in regular contact with Li’s family throughout the past three months while investigations were ongoing.

Explaining that the dancer faced a long road to recovery, he added "no matter how many people are arrested by police today, how many people are prosecuted or even convicted by the court in the future, all of the above may not make up for what the injured lost in this incident.”

It was previously reported that the third and fourth sections of Li’s cervical vertebrae had been dislocated in the accident, which left him unable to move his limbs while also sustaining injuries to his head and lungs. It is unclear if his damaged nerves will grow back, leaving him facing the possibility of becoming paralysed.

Fraud charges, which carry a potential 14-year jail term, could be applied as investigations are believed to show that the weight of the screen was reported to be 520 pounds, when in fact it should have been 520 kilograms - more than double the advised weight.

Image: A screen falling during the performance by boy band Mirror at the Hong Kong Coliseum in July. Credit: Instagram.