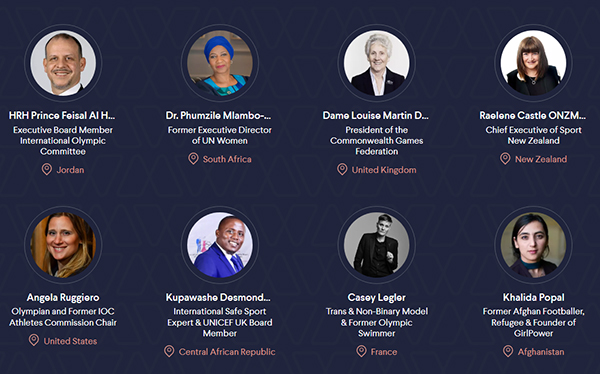 A diverse range of additional global speakers have been added to an already impressive line-up to mark ‘100 days to go’ until the 8th IWG World Conference on Women & Sport in Aotearoa New Zealand, 14th -17th November 2022.

The additional speakers join over 220+ sessions and almost 500 speakers previously announced for the world’s largest gathering to advance gender equity and equality in sport and physical activity. Over 1,200+ participants are expected in person at the Te Pokapū - Aotea performing arts and events centre in the heart of Auckland, with hundreds more online via a world class conferencing system.

This latest speaker announcement was made today by Women in Sport Aotearoa, Ngā Wāhine Hākinakina o Aotearoa (WISPA), outgoing Secretariat agency for the International Working Group (IWG) on Women & Sport 2018 - 2022. WISPA will deliver the 8th IWG World Conference on Women & Sport this November, bookending a short period of co-governance with the United Kingdom, which took on global Secretariat leadership during the Birmingham 2022 Commonwealth Games.

Pauline Harrison, Chair of the IWG World Conference Steering Committee notes "with only 100 days to go until the IWG World Conference, things are really gearing up now! We are delighted to be adding yet another set of extraordinary global headliners to our programming line-up, just as we also see a surge in global delegations signing up to participate, including the International Olympic Committee, World Rugby, World Netball and the Japan Sports Council.

“Having just been welcomed at events around the Birmingham 2022 Commonwealth Games, it’s clear that the IWG World Conference is considered a ‘must attend’ event on the calendar for any person or organisation working to further the advancement of women and girls in sport and physical activity."

The 8th IWG World Conference on Women & Sport is built upon social learning principles - inspired by the storytelling and collaboration inherent to the indigenous Māori culture of Aotearoa New Zealand. Participants will explore five global themes through seven lenses, generated by a 150+ strong global programming team, and agree practical solutions to be applied in their own contexts. The ambition is to bring the movement together as one, to drive equity further and faster in future.

The theme of the conference, "Change Inspires Change" is about encouraging people to share their story of change. No matter how small or large - their story can and will inspire others to make positive change for women and girls in sport and physical activity. The event will spur on participants to develop personal and organisational actions and commitments that will positively impact lives.

The speakers announced today are on the new ‘Speakers’ page on the IWG World Conference Hub.

In addition, the International Working Group (IWG) on Women & Sport has today released range of Exhibition Packages and Event Partnership opportunities to mark 100 days until the IWG World Conference. The event is the perfect backdrop for exhibiting and engaging with a global network of key influencers and decision makers. Showcase your products, services and solutions in a hybrid format, both in person and virtually. More information at www.iwgwomenandsport.org/iwg-exhibition-packages.

Group Packages are on sale now, with a call to action to ‘Register your Delegation’. Confirmed delegations include the International Olympic Committee, World Rugby, World Netball, Oceania Hockey, and the Japan Sports Council. More information at iwgwomenandsport.org/register-group-delegation/